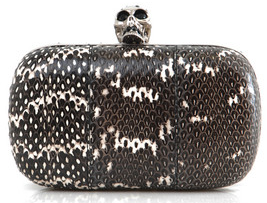 The Alexander McQueen Whipsnake Clutch has a kind of sinister, scary feel to it. I think it’s the fact that the silver skull has black crystals in the eyes and teeth. Also the black whipsnake effect has touches of white, giving the whipsnake Alexander McQueen clutch a kind of mortal vibe. Whatever it is, this McQueen swipsnake clutch is probably the most morbid and edgy of all the Alexander McQueen skull clutches that I have come across. It’s great if you are going for a gothic look. As the skull clutches are all so different, and sell out fast, grab this whipsnake clutch while you can, as they don’t tend to remake once they sell out. Buy through Luisa Via Roma