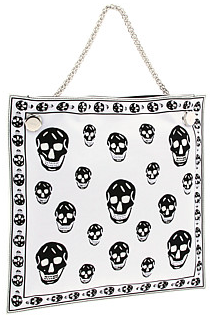 I am dedicating this Alexander McQueen Skull Print Canvas Shopperin memory of the late Alexander McQueen. Quite fittingly, this Alexander McQueen Canvas Skull Shopper features skulls. Perhaps he always had a slight fascination with the occult and dark side of life. This is obvious in hindsight, as he took his own life this morning in London. -He hung himself… So incredibly tragic and sad… What could make someone like Alexander McQueen, such a fashion icon, someone who really had it all, the world at his feet, who was at the top of his game, actually be so miserable and unhappy that he actually saw no other option but to take his own life? Could it be the depressing English weather? The fact that his mother had recently died? The fact that his mentor had died a few years earlier? I guess we’ll never really know…

It is crazy when you think about it though… the majority of us aspire to achieve only a fraction of the success that Alexander McQueen achieved. We think that once we attain that kind of success, we will be happy. But will we be happy? Here’s someone who really was at the height of his game and took his own life. Then there’s Karl Rabeder, a man who made £3 million and recently gave it all away to charity because he realised that money could not buy happiness. He always thought that it would, but when he finally got there, he discovered that he had been working his entire life to attain something that he thought would lead to happiness, when in reality, that very thing was actually standing in the way of him and happiness. So he gave it all away.

So what makes one happy? Owning lots of handbags? I think not. I think happiness is LIVING, DOING, and BEING. It’s not about having. Of course, having a nice handbag collection is wonderful, but maybe having too much disconnects us from reality. And its staying in touch with reality, the simple things and pleasures in life that actually make us happy. I think we are all too busy chasing the dream that we neglect to appreciate the simple things in life that we take for granted, which are actually the foundation of our happiness. These are the things that we should nurture and love. Buy this Alexander McQueen Canvas Shopper through Luisa Via Roma