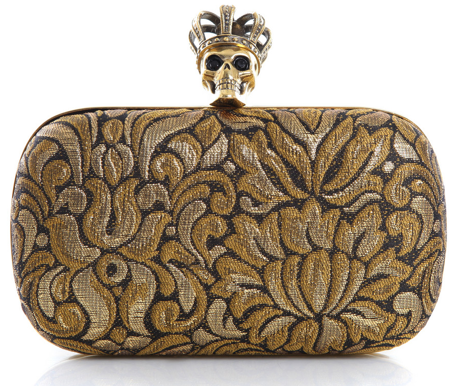 The Jacquard Skull Clutch by Alexander McQueen is a regal aristocratic twist on the Alexander McQueen Skull clutch collection. This skull box clutch by the late Alexander McQueen looks like something straight out of the 1600s. The luxury gold and siver floral embroidery adornment of the box is so regal and a take on the royal fashions from the long ago past (we’re talking 100s of years ago!). The stunning gold skull clasp gives it a kind of creepy appearance, but of course, very current and in. Skulls are the biggest fashion statement at the moment, so you really can’t go wrong here. The best part of the skull Jacquard clutch though is the royal crown on the skull’s head. It’s just so sinister, but cool!!! I love this Jacquard version of the Alexander McQueen box clutch. Buy through Luisa Via Roma